Raise your Teacup
for Catherine of Braganza! 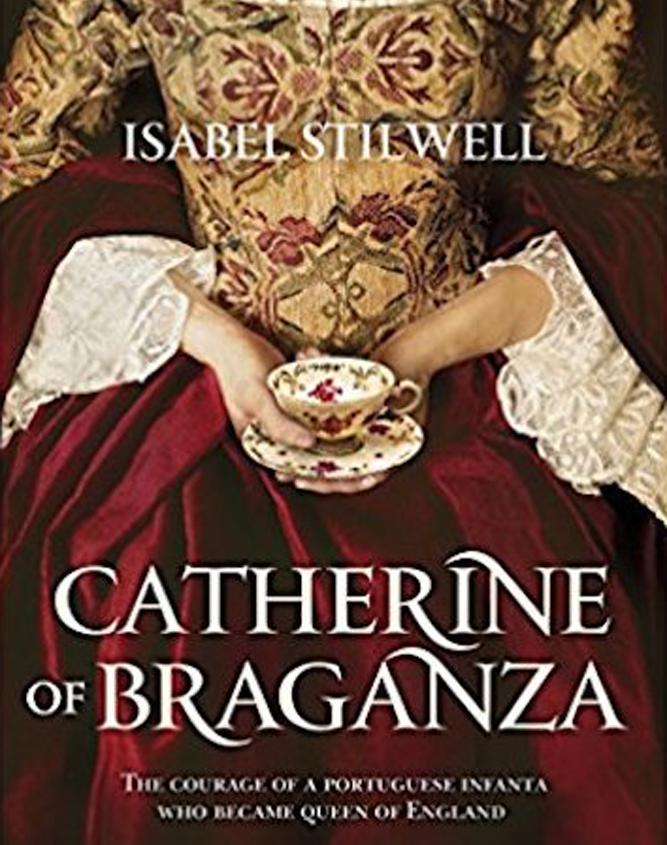 For National Tea Day, Isabel Stilwell investigates the story of Catherine of Braganza, the queen who popularized Britain’s favorite drink.

In 1777 a Frenchman came to Portugal as a spy, and to prove his point that the country was utterly under British influence, he wrote: “The Portuguese copy the English to such an extent, that they even drink tea several times a day.”

I am sure that at that moment Catherine of Braganza turned in her grave, as did the poet and politician Edmund Waller, who in 1663 honored the queen on her 25th birthday, the second spent in England, with a poem to “The best of Queens, the best of herbs, we owe to that bold nation which the way did show, to the fair region where the sun doth rise, whose productions we so justly prize.”

And she would, I am sure, squirm if she saw us all drop a teabag into a mug, or worse, a paper cup, without any ritual or preparation. At best she would have argued that we “lacked tea”, or hadn’t drunk it as children, which in Portugal are two ways of telling that someone is uncouth.

Of course, we know Catherine of Braganza wasn’t the first to introduce tea in Britain — Samuel Pepys talked about it two years earlier — but she did turn drinking it into a fad at court, a social habit between her ladies, dazzled by the beauty of the porcelain teapots, saucers and cups she brought with her. And as the price of this exotic drink lowered, it took over the rest of the kingdom.

But Catherine did more for tea than tug along a trunk of tea leaves in her luggage: she brought with her an infinite source of tea as part of her dowry, as well as a secret treaty that ensured the help of the English in safeguarding Portugal’s independence from Spain, and regaining Portuguese territories from the Dutch.

Catherine was born the daughter of a duke, in a family palace in Villa Viçosa, in the south of Portugal. She soon became a royal princess, when her father was acclaimed king, as Portugal’s independence from Spain was restored. The death of her two eldest siblings made her the most important pawn in the diplomatic challenge of consolidating the new Braganza dynasty. In other words, she had to be quickly married into a European royal family.

Her father, king João IV, sent in haste for the best “photographer” he could find – a pre-requisite for advertising her hand. Dirk Stoop’s painting of Catherine is the first portrait we have of the princess, not much more than ten years old at the time. In it we find a dark-haired girl, her face made brighter by big dark eyes, elegant features and rosy cheeks – sweet looking.

In the meantime, Charles II was looking for a wife. Like Catherine’s father he was a newcomer to the throne, with empty coffers, but even his need for money couldn’t trump his aesthetic standards. Sure, she didn’t have to be as beautiful as his mistresses, namely Barbara Palmer, the favorite at the time, but he refused to have an ugly woman in his bed. So much so, that he didn’t trust the portrait, sending a reliable spy to Lisbon to confirm that the lady in question was not only good looking, but that she also had none of the flaws the Spanish ambassador swore she possessed.

That worry at rest, he agreed to talk about money. He particularly wished for a lucrative settlement, as part of it would go into his own pocket, hidden from the stingy vigilance of Parliament. Catherine’s strong and wilful mother, regent at the time, knew she had to bid high, and promised £500.

Plus, in a secret clause, she offered Tangier, with its immense possibilities of commerce in the Mediterranean; Bombay, with its riches and strategically located ports; plus free trade in Brazil, India and Africa. Later, Charles leased Bombay to the British East India Company, at £10 a year, paid in gold, ensuring the monopoly of English trade, and that Catherine’s tea would be forever in English teapots.

Finally in December of 1661, the marriage was agreed. Charles was quick to write to his new wife, telling her in a very passionate letter, that he longed to see her beloved self in the kingdom that is already hers, with the same longing he felt during his long exile from England. He then showered her with gifts, sent to Lisbon with such pomp and circumstance as to really impress the 23-year-old girl, who for years now had been listening to tales about his dashing adventures. She answered back, and in the exchange of letters we discover Catherine’s strong character and determination. She learnt English, she applied herself to standing in high heels, because they told her the King preferred tall women, and she would dispense with most of her clothes on arrival in Plymouth, realizing they were out of fashion in the English court, but she would never give up her faith or her love for her husband. And Charles, although never faithful, was loyal, even when after several miscarriages she was unable to give him an heir, and Parliament insisted he should set her aside.

Thankfully we have the letters, letters between Charles and Catherine, between Catherine and her mother, between ambassadors, and reports and diaries. I love diaries, and paintings and portraits that make it possible to come closer to the real Catherine, so often described as dull, a dimwit or a bigot. For example, Catherine didn’t grow up in a forgotten land, behind the walls of a convent, as so many will still tell you, but in the Ribeira Palace, overlooking the Tagus’ riverfront, surrounded by ambassadors and musicians, philosophers and scientists, and all those who landed in Lisbon, then an obligatory trading point.

So, today, of all days, raise your teacup for Catherine of Braganza, the only Portuguese princess who became queen of England, and then go out and look for her. You will find her hanging on the walls of Windsor Castle, painted on its ceilings, in Hampton Court’s galleries, or until 13 May, at the centre of the Charles II: Art & Power exhibition at Buckingham Palace. And don’t forget the Queen’s Chapel, near St James – look for the Portuguese coat of arms entwined with the Stuarts’, noticing the palm trees of Tangier.

And, at the end of the day, remember the nursery rhyme that keeps her in our memories: “What are little girls made of? Sugar and Spice and all things nice, that’s what little girls are made of.” That’s Catherine.

Isabel Stilwell is a Portuguese journalist and writer. Her historical novel on Queen Filipa de Lencastre, published in 2007, was a huge success, selling more than more than 55 thousand copies. Since then Isabel has written six historical novels about the queens of Portugal, including Catherine of Braganza. Philippa of Lancaster was her first book translated into English, followed by Catherine of Braganza, which is available from Livros Horizonte via Amazon.

All Images: All Rights Reserved: Catherine of Braganza, The Courage of a Portuguese Infanta Who Became Queen of England.

Tea and Gin are quintessentially British

Did you know that tea and gin were imported to the island country by two ancestors of Queen Elizabeth?

“Catherine did more for tea than tug along a trunk of tea leaves in her luggage: she brought with her an infinite source of tea as part of her dowry, as well as a secret treaty that ensured the help of the English in safeguarding Portugal’s independence from Spain, and regaining Portuguese territories from the Dutch.”

Charles II had been restored as monarch in 1660 after the death of Oliver Cromwell in 1658 and the collapse of the republican English Commonwealth. His father, Charles I, was beheaded, and The Commonwealth was the political structure during the period from 1649 to 1660 when England and Wales, along with Ireland and Scotland later,were governed as a republic after the end of the Second English Civil War and the trial and execution of Charles I.

On 8 May 1660, the Convention Parliament proclaimed that King Charles II had been the lawful monarch since the execution of Charles I in January 1649. Charles returned from exile on 23 May. He entered London on 29 May, his birthday. To celebrate “his Majesty’s Return to his Parliament,” May 29 was made a public holiday, popularly known as Oak Apple Day.Charles II was crowned at Westminster Abbey on 23 April 1661

Gin Comes to the British Isles

James’ personal Catholicism was tolerated until he had a son. Fears grew that a Catholic dynasty was being created. In 1687, James forced the Anglican church leaders to read the Declaration of Indulgence, which was a proclamation that granted religious liberty to Catholics and dissenters.

Mary II – the daughter of James II, married her first cousin, William of Orange. Mary II was Queen regnant – a female monarch in her own right.

It was both James’ religious views and his autocratic tendencies that caused the English Parliament to ask William and Mary to replace Mary’s father, James. James would be the last Catholic monarch of England, Scotland, and Ireland.

William and Mary restored a Protestant throne and co-ruled the three Kingdoms – England, Scotland, and Ireland – from 1689 until Mary’s death in 1694.

In AD 70, a physician had published a remedy for chest ailments with juniper berries steeped in wine. In the 16thcentury, the Dutch began producing a spirit called “genever.” It essentially consisted of a malt wine base and a healthy amount of juniper berries to mask its harsh flavor. It was, of course, a “medicinal” liquid. By the 1700s, it had taken on a new form: Gin.

When the new King and Queen – William and Mary – started entertaining in Kensington they brought Gin with them.

William III began his reign by implementing trade-war and protectionist-style economic tactics against France. He enforced blockades and introduced heavy taxes on French wine and cognac in an attempt to weaken France’ economy.

At the same time, William III instituted The Corn Laws in England. These decrees provided tax breaks on spirits production, resulting in a distilling free-for-all. This led to a period in England that is often dubbed the “Gin Craze,” a period where a pint of Gin was cheaper than a pint of beer. The high taxes on Beer – to help pay for wars with France and King Louis XIV as he protected the French Huguenots from death and persecution within his Principality of Orange – would mean a gin drink would be “more bang for your buck” as you could get nicely drunk, for significantly less money.

In fact, your choice of drinks was a political statement of which King and which religion you supported. If you supported the exiled Catholic King, you would be drinking Wine and Cognac, whereas drinking juniper flavored beverages was a sign of supporting the new King and Queen at Kensington.

Read this for a good introduction to the history of Gin.