Kew Gardens
and the Queen’s Beasts 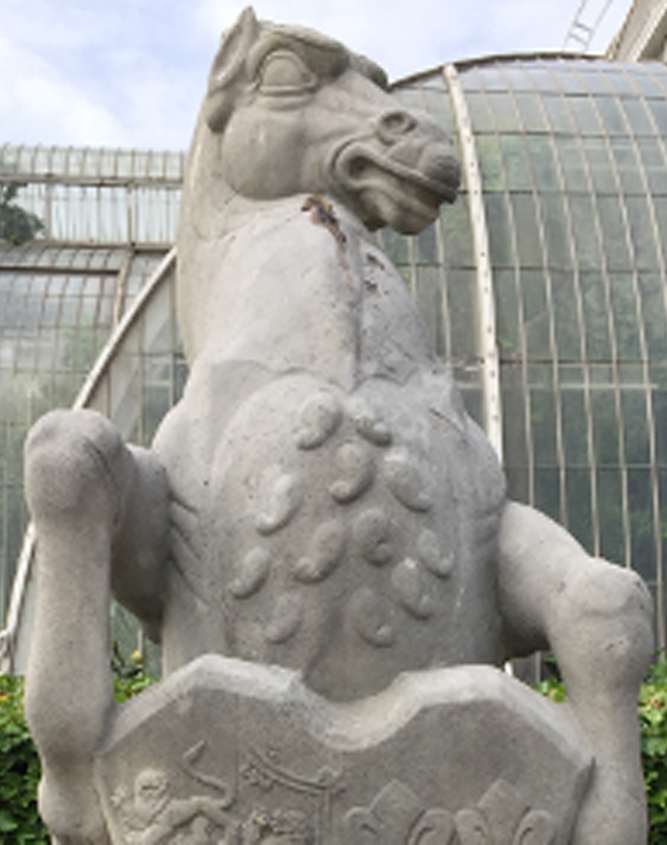 Minutes away from Heathrow Airport in London, up the Underground District Line train is Kew – in the London Borough of Richmond upon Thames. You may be familiar with the name Kew from Kate Middleton’s employment at the fashion chain, Jigsaw, prior to becoming the Duchess of Cambridge. Kew is known for its resplendent garden, the Royal Botanic Gardens – or Kew Gardens.

If taking public transportation, exit at the Kew Garden Station, from either the north District Line of the Underground or the north London Line of the Overground. Upon exiting the Kew Station, you will find the Tap on the Line, a pub well worth the stop – it features indoor and outdoor dining, and a fine selection of cider.

Enjoy a short walk through the quaint and quirky business district on the way to Kew Gardens.

Regal iron gates welcome you to Kew Gardens’ 303 acres of gardens and lakes.

Once inside you will notice the Kew Palm House, which contains the tropical rain forest exhibit. Guarding the exhibit are replicas of the Queen’s Beasts, which denote the lineage of monarch Queen Elizabeth II. Their fascinating history can be found our Queen’s Beasts App.

Also, in the garden you will find brilliant floral displays;

Hope you enjoyed our time together.

Until next time, may be the Beasts in your life be benevolent,

To those taking the Underground train back to London from Kew, may you fair better than we did:

It was a pleasant day at Kew
The flowers were all in bloom
We were spot on time and then we met you.
The underground station at Kew, helpful your employee appeared to be,
The things you told were just not true, sadly

You sent us down the garden path
Change to the Piccadilly Circus line you said
Not realizing you were the clown
All we needed was take the district train down.

Our tour was missed
It’s the train fault we hissed
But golden tours familiar with errant detours
Arranged a guided tour two days hence
And for only a mere few more pence
So, our tour we shall have after all.

As we have now parted from Kew Station,
We are glad to bid you adieu.
Pee you to the train employee of Kew Underground who led us astray
May your sense of decent directions eventually be found.

By Paul and Tina Cartwright
at Shakespeare Pub at Victoria Station, 2015